“Tippy-Tippy-Tap, which colour do you want?”

As a kid, I used to play this game in school all the time. I remember I used to select my favourite colour, which used to change almost every day. I never really had one go-to colour because I felt that every colour would feel bad if I didn’t select it. Little did I know that colours don’t have feelings.

I came across the new and fairly controversial rebranding of the colourful chocolate candy, Mars and Murrie, AKA M&M’s. They are probably the only candy that people of all ages enjoy; kids love the colours and adults are not embarrassed to eat it.

Although similar to Skittles by Nestle and Gems by Cadbury, M&M’s are the strongest player in the market. Besides its clear and catchy motto, “Melts in your mouth, not in your hands”, what sets M&M’s apart from its competitors is its brand mascots.

The brand mascots of any brand are its identity, it is what defines the brand and can potentially make or break the brand image. Often brands go above and beyond to create a brand mascot that represents them well. All that M&M’s did was, it gave a personality to every coloured candy in the packet, be it the brainy brown or the panicky orange, every colour has something new and different to provide to every advertisement and the brand. 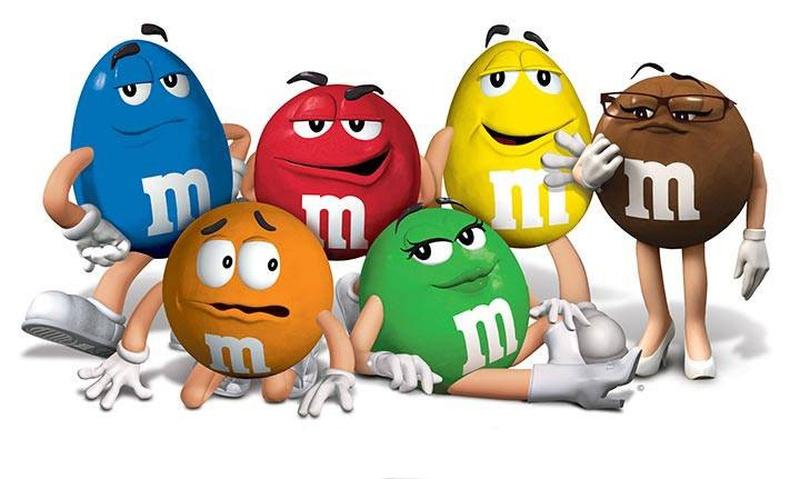 The advertisements released by the company always have a fresh and a creative idea to bring to the table, whether that’s releasing a new product or revealing bits of personalities of the different colours. Each colour has a unique personality that adds to the brand. These personalities have been depicted in such a way that it not only gives the audience something new to watch everytime but also allows the company to come up with new content that uses these characters (more characters = more content).

M&M’s are not only an individual’s favourite candy but could also be their coolest friend. I’ve listed below some of my observations from M&M’s advertisements that I really liked:

These characters have been described on M&M’s website, where we get a sneak peek into their personalities and we get to see what they’re like. In my opinion, this is probably the best way for users to engage with the product online. Let’s say an individual comes across an advertisement on TV or some social media platform, they find a character funny or relatable and hence they’d want to know more about them. They would do a quick google search and land on the webpage where these characters are mentioned. They would read about them, fall in love with them and will always remember the character if not the brand. As social beings, we always want to know more about a person we find interesting and by giving humanistic features to these brand mascots, M&M has successfully connected with the audience. 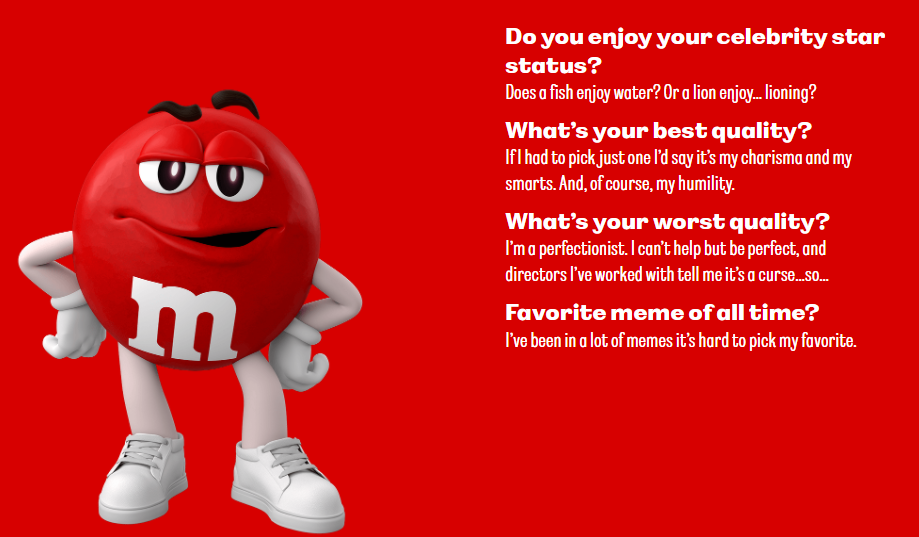 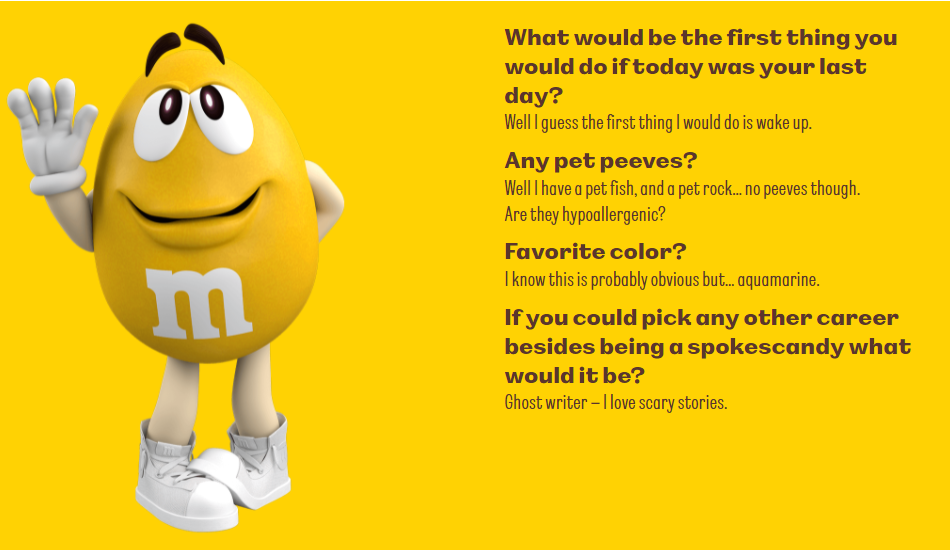 Storytelling is a big part of any brand. Without creating a background about a product or character, it is super difficult to connect with the users on the other side of the screen. However, M&M’s are not only a master at the art of storytelling but have already taken it to the next level. On the occasion of their 75th birthday, M&M’s released a 360-degree video that gave the audience an apartment tour of the colours. We could see where they lived, what sort of furniture they owned and what their aesthetic is. There’s no better way to know a person than analysing their room/apartment. Along with the interactive video, they also added little details in the room that further described the personality of the character hence strengthening the bond between the audience and the characters.

For me, two of my favourites are Orange and Ms Brown. Orange is the one who’s always panicking about what might happen next, it reminds me of the younger version of me back in school when I was worried and scared about literally everything around me. I do find the character funny but because there is a version of me who used to be just like the character, I can relate to it more. Ms Brown on the other hand is the woman I wish to be. She’s the perfect level of sassy and witty, she’s also bossy but a bit too bossy than I want to be.

It’s a match! - with occasions

These advertisements are the perfect blend of occasions and humour. Be it Halloween or Valentine’s, these characters never fail to disappoint their audience. The biggest fear of every character is (obviously) being eaten by a human being. In their series of Halloween ads where they urge the audience to buy the candy to distribute to trick-or-treaters, they have incorporated this fear in various ways. My favourite is the one where Red shows off his Halloween costume which is that of a cannibal because he’s eating himself.

They also have an option of creating personalised M&M’s which is probably the coolest feature any brand can have. Be it Valentines, birthdays or weddings, users can get their image or message printed on M&M’s and send it to their loved ones. Creating personalised candies helps the brand connect with its audience through mutual trust and understanding. If I get a box full of candies that have a personalised message for me, I would not only fall in love with a person who gave it to me but also with the brand who took the effort to make it (no matter how easy it must have been for them). 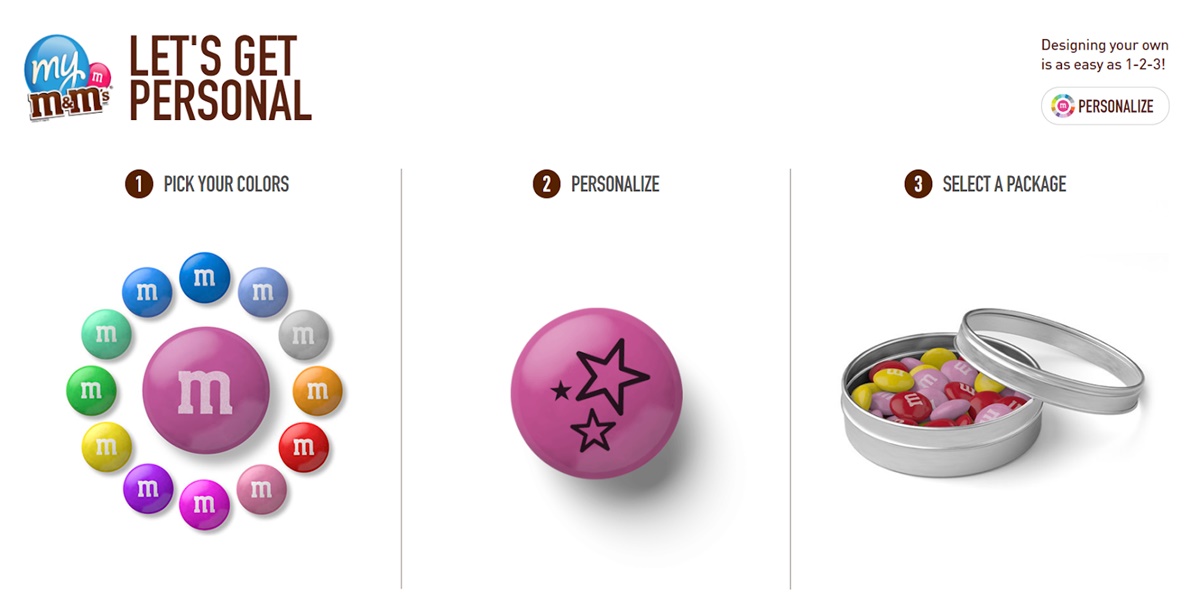 The idea of this candy came up during World War 2 when soldiers could carry these little chocolate candies to other places without having them melt on their way. The target audience shifted from the military to children after the war but they decided to target parents instead of children through their tagline, “Melts in your mouth, not in your hands”. Soon, they realised that men and women enjoyed the candy as much as the children did and decided to work towards it by releasing mature characters such as Ms Brown. And obviously, the advertisements by M&M’s are humourous which are meant for all of their target audience.

M&M’s have always been successful at winning people’s hearts and tastebuds. There are a lot of other strategies that they use to maintain their brand and interact with their audience. They play around with colours, world events, movies and TV shows and even dress up the colourful characters as real-life celebrities.

The most important aspect of a brand is its ability to stay relevant, in other words, it has to change with changing times. For the first time in about 10 years, M&M’s have rebranded with new polished features of their characters. Their primary aim behind the “One for all & all for fun” campaign is to make everyone feel comfortable and belonged. The campaign has met with some criticism, as does every new change. However, I feel that in today’s world every brand is stepping up and trying to make a difference by being inclusive and M&M’s are just doing their part by being a part of this change.